This premium range showcases the unique mono-floral honeys of New Zealand. The mono-floral honeys are produced by careful attention to beekeeping methods, such as the placement of hives in areas with high concentration of the desired floral source, the harvesting of the honey immediately following the end of the nectar flow from this flower, the checking of honey frames at the time of extraction and the laboratory testing of the honey for pollen counts and other variables. As a result, the specific honey characteristics of each floral source can be assured and enjoyed. Honeyland has selected a range of honeys representative of the floral diversity of New Zealand:

Botanical name Knightia excelsa Maori name Rewarewa The Rewarewa tree (New Zealand’s Honeysuckle tree) is related to the Australian Bottle-brush. It is a distinctive tall upright branching tree, reaching up to 30 metres. It is found often in regenerating bush as secondary growth, throughout the North Island and in the Marlborough Sounds, at the top of the South Island. In New Zealand’s late Spring (October to December) brick red, needle-like flowers are borne in bunches on the top branches. These flower clusters (inflorescence) slowly split as they mature and curl into tight intricate spirals. This spiral shape, seen frequently with plants in New Zealand forests, has become a New Zealand icon, symbolizing the unfolding potential of our life cycle. The unique flowers stay curled on the tree until late summer when they fall to cover the earth in a thick red carpet. These flowers are pollinated by the many nectar-feeding birds of New Zealand. The Maori people recognised the healing power of this nectar long before the arrival of the honey bee, Apis mellifera. The flower was broken off and tapped against the side of a calabash to collect the nectar and this was sucked through a hollow reed stalk to sooth an inflamed throat. These days the honey bee makes this precious nectar much more accessible, and it is through modern medical research that its medicinal value can be proved. In particular, the Waikato University Honey Research Unit has looked at the antioxidant properties of various New Zealand honeys and has revealed that Rewarewa honey has significant antioxidant levels. In the future we may see this honey marketed in a similar way to UMF® Manuka honey, with test results stating specific antioxidant levels. Characteristics of Rewarewa Honey

Botanical name Leptospermum scoparium Maori name Kahikatoa The Maori recognized the Manuka tree as a special child of Tane Mahuta, the God of New Zealand’s forest, in spite of its small size and insignificant shape. This Manuka was valued by both Maori and early European settlers and used medicinally for a wide range of treatments including poultices of the bark and seed pod for burns and wounds, infusions of the leaves and bark for digestive problems, inflammation and pain relief, and even inhalations for colds. It is interesting to note that these treatments using the leaves and bark of the Manuka tree correlate with the healing properties of the honey, as supported by recent scientific research. The Manuka has a close relative, Kanuka, Leptospermum ericoides, which produces pollen and honey virtually indistinguishable from Manuka, and with similar healing properties. Both trees grow throughout New Zealand, from coastal scrubland right up to Alpine altitudes, in uncultivated wilderness areas, giving nursery shelter to regenerating forest trees. The Manuka grows up to 4 metres, but the taller Kanuka can reach 15 metres. Both have attractive five-petalled white flowers tinged with pink centers, yielding nectar in early New Zealand Summer (November to early January). In a good season, trees covered with a profusion of these delicate white flowers look as though they are covered with a light dusting of snow. Characteristics of Manuka Honey

Botanical name Trifolium repens Common name White Clover White Clover is a perennial legume of temperate regions, growing in a sprawling, prostrate manner. It was introduced into New Zealand by the early European settlers and has become the key to New Zealand’s successful pastoral farming. It has an ability to fix nitrogen in the soil, creating a balanced ecological system, reducing the reliance on artificial fertilizers. At the same time it adds quality to animal diets and increases livestock performance, particularly important for New Zealand’s dairy industry. White Clover is extremely common in New Zealand, not only in grazed pastures, but also occurring as a wild flower in waste and cultivated areas, having adapted to a large range of soil types and climatic conditions. The white flower, flushed with a pink throat, is densely packed into a spherical flower cluster. It begins to appear in pastures in New Zealand’s early Summer. However, it is not until soil temperatures are raised with the critical moisture level dropping, and the plant becoming slightly stressed, that the honey flow reaches its peak – usually around January, though this depends greatly on the locality and weather. Bees are vital for pollination, creating an important synergy between agriculture and apiculture. ‘Summer on the farm’ is traditionally associated with expansive fields of clover. The saying “up to your knees in clover” is associated with a blissful state of well-being – intoxicated by the sweet smelling flowers, the warm sunshine and the happy sound of busy bees. White Clover Honey Characteristics 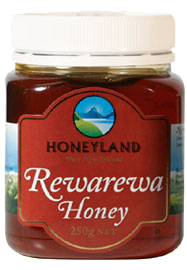 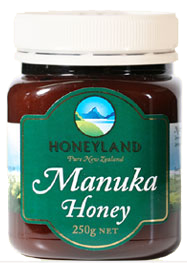 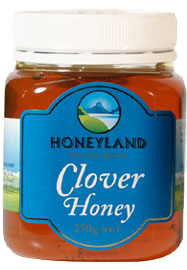